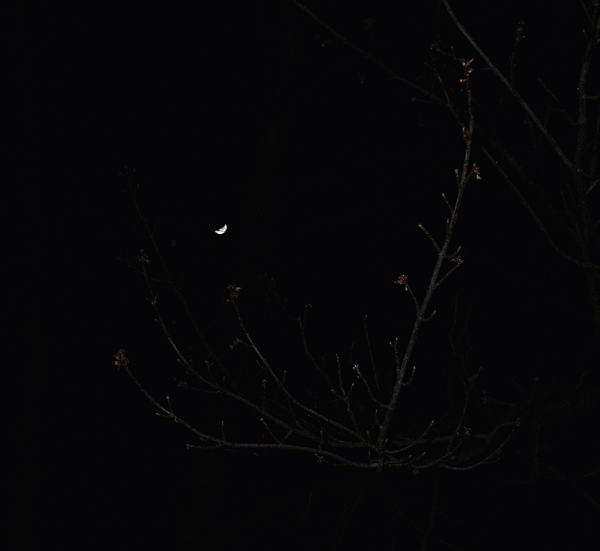 I know you all think I’m crazy. But I’m not. I know what I saw, and if you don’t see them- if you don’t HEAR them- then you’re the crazy ones. They’re as plain as day, I tell you. As crystal clear as a snapshot caught on Chrome 100 film.

I saw him at approximately 7:45 P.M. driving East on Lefthand Canyon Drive. It’s sunset, the light is fading fast but you can see the infinite expanse of prairie ahead of you, Haystack Mountain way out, a silent monolith in the oncoming night- and to my left are some power lines. I was returning from a trade show in Nederland. Got some fascinating material up there- to go along with the one of the woman in the room I now have more.

They’re unlike anything I’ve ever seen, they draw you in and make you experience things more vividly than you could otherwise. Forget DVD. These videotapes are the future, I tell you. More interactive than virtual reality. I had a whole crate of them in the trunk.

When I saw the man frying his brains out next to one of these enormous power lines, I swerved off the ditch and the whole crate tumbled off. I checked that my truck still worked- it did- put it in park and went around to the back to pick all the videos up off the ground. But I had seen him, clear as day, crystal clear, standing near this enormous transmitter-receiver thing they had installed. And his head was on fire. I thought maybe it was a suicide attempt, although from the impact I was still somewhat dazed.

There was a loose wire at the base of the receiver that had become disconnected and it was emitting sparks. I was afraid it could start a wildfire and I would be blamed, they’d say I ran the truck into the pole or something. But I didn’t. I swear I didn’t, and at that moment the sparks started flying faster and faster, and the man appeared gradually, flickering on and off like a weary lightbulb. I could see barely anything, the sun had sunk over the range and the hills were shrouded in shadow, and he writhed as the white-hot flow surged around his skin. In places it was boiling. He had the consistency of ash.

I didn’t go near him- I merely stood and placed the crate gingerly into the back and stared as he convulsed and writhed, letting out small noises in intervals. He had no features to speak of, save two piercing yellow eyes and that bizarre seething complexion. Near his feet were what appeared to be several scattered sticks, and then he opened his mouth and a piercing shriek rang from top to bottom, and the power line began glowing with white-hot heat from where I was standing to the inestimable depths of the horizon. It was positively malicious.

With the yell of this thing, he lifted his arms and a tape I had bought at the exchange rose from the crate before bursting into a vivid ball of flame about 20 feet over our heads. And all the while he was overflowing with radiance.

“Ｅｌｌｉｓ.” it said. I approached the front of the truck and began feeling for the handle of the door, but I was frozen stiff with shock. The thing knew my name. And it was only me and him out here, alone, in the twilit expanse. I chose to meet him on his own terms, though while he was attached to the tower via the wire he seemed powerful enough to break free and slit my throat. Of course, if he was capable of that, he likely wouldn’t have done so already.

“Hello,” I said. I don’t know what I was thinking. I had seen these things before, in some capacity or in some small way, but I don’t know how to approach them, how to interact with them, what the best methods are. This was the first I had seen in its complete form. God, he was terrible to behold, even in these low-visibility conditions.

“ｇｉｖｅ ｍｅ ｔｈｅ ｔａｐｅｓ, ｅｌｌｉｓ.” The voice of the thing was like that of a cable channel with bad reception- it hissed and cut out, and he lunged forward for the crate, which was now piled neatly and safely underneath the tarp. I lunged backward as he did so, and the wire that tethered him to this row of equipment let loose a shower of sparks the likes of which you don’t usually witness outside the Fourth of July.

I said nothing then, and as he retreated to his position at the base of the tower I crossed my arms and planted both shoes into the mud and watched as the row of towers switched on and off, from complete luminescence to absolute darkness. It was, as Nietzsche said, a test of the will to power- I did not take my eyes off his flickering yellow holes, and my eyes, which I imagine were glinting like a cat’s in the soft purple twilight shades, were bored into as he probed me- every facet of my being.

And we both stood as the wind picked up and whipped through the trees on the opposite side of the road. There was no traffic along Lefthand Canyon Drive, only the incessant buzz of the copper tubing and steel plating which housed the structure- the insulative rubber melting in small drips from the lines as this thing, whatever he was, continued making blood-curdling noises of anguish. He wouldn’t be getting his hands on the tapes. He was powerless, And he knew that.

I keep seeing them. The more tapes I collect, the more I film on my Camcorder, the more they pop up. Not just the weak one, which I left behind in his pathetic existence after he vanished into thin air. The new ones are stronger. Better at what they do. They want my collection. Have to keep it locked away in the basement, only bring it up for very special occasions now.

And they whisper to me at night. I need somewhere safe to keep the tapes, somewhere I know they can’t get at them. It’s about the will to power. Whose will is the stronger- man, or beast? Who will triumph? Will they rend me limb from limb, splay my hide out on my rooftop, or will I outsmart them, somehow? Surely they must have some kind of weakness. Tapes fit into it. That thing wanted my tapes, wanted to destroy them. They want to destroy all that I’ve worked for.

Only time will tell.