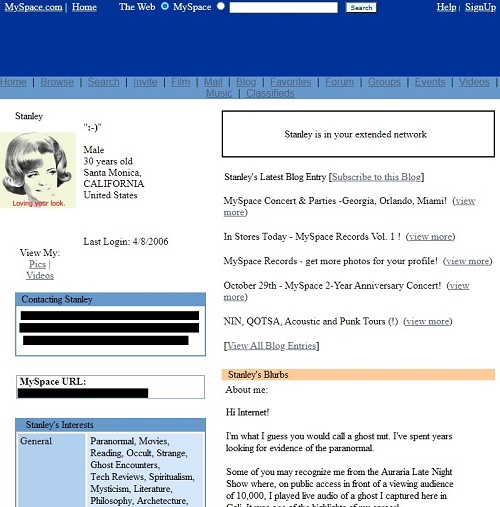 Hey there everyone. Had an experience this week I think might be worth posting here. Comment down below if you've ever seen anything along these lines.

You probably already know this about me if you've been reading this blog, but I always want to be where the action is. I think it's some kind of hyperfixation, akin to those old reporters who always wanted to be the first on the scene whenever there was a burning building or a crime scene. Of course, in my case I arrive long after the buildings have burned down and the chalk that marked the body has been washed away by rain. But you get the point.

I think what it boils down to is curiosity, the insatiable hunger to confront the unknown which has driven us forward since the dawn of time. My rational thinking tells me I shouldn't visit the empty sewage pipe, that even if there are no ghosts there's probably some jagged metal I could cut myself on or a spider nest or something equally awful, but then my curiosity kicks in and it's onward to the sewage pipe we go. Rinse and repeat.

I usually go on a couple expeditions a year. Takes a lot of resources- film and audio equipment, spectrograms (which for whatever reason seem to be everyone's favorite) and of course enough for motels and food. A lot of that comes from donations I've got from you, reading this blog right now, so thanks for that. I try to give you guys satisfactory results. Not concrete evidence, but something. I always have to get something. Anyway, this year I already went to visit the DeVry compound in Melrose. You can find my account of that trip on the next page- but for now I'd like to tell you about my expedition to the abandoned Harcourt Theatre in Woodhaven, Michigan.

The theatre, built in 1936, has like many other buildings nationwide fallen prey to entropy. Six years ago, it was burned.

Nobody knows exactly how the fire started, however local folklore states that the owner started the fire himself. The building has for obvious reasons failed to acquire landmark status, and as such by the time I got there it was scheduled for demolition the following month. There was no fence around it, though, and nobody around, and I decided it was likely my only chance to explore this structure before it was entirely gone from the face of the Earth. The building itself is only half of what it used to be, made for the most part out of bricks and mortar, now turned ash black. It's set back in a row of similarly useless buildings, all with foreclosure signs across the front.

I arrived around 7 P.M. right when the sun was going down. The carpet was wet, a lot of water damage because the roof is actually caving in some places- in the front it's completely open, giving way to a panoramic view of the sky. It was honestly surreal to step into a building this ruined- everywhere you saw things that would otherwise be normal. The popcorn machine had given into the heat, glass spewed all over, the remnants of 6-year-old popcorn scattered around. All the posters were beyond recognition, peeling and flaking. And the main desk was completely gone, I guess it had been wood but now there was just a rectangular formation of ash. Like I said, absolutely surreal.

By this point visibility is dropping, so I get my flashlight out and point it directly at the back, where the auditoriums are. I also get my camera out, turn on the flash, and start taking pictures at 10-second intervals while I walk forward. It's important in a place like this to keep taking as many pictures as possible as often as possible, the more pictures the higher the likelihood you'll catch something.

The first auditorium I step into is strangely quiet, the kind of death knell you can only encounter in an area this devoid of activity, and the seats seem to stretch onward in rows and columns ad infinitum. The screen is tattered and beaten, worn from the storms which have pelted it. I sit down in one of these battered recliners, catch my breath. Camera is still good on battery. I point the flashlight directly ahead, its beam glints off the particulate.

This is where it gets odd, folks. Place did have some kind of presence. Breath on my neck, I whirl around, stand up, legs feel faint. Nobody there. Footsteps which seem to sound down the aisle, back toward the entrance. I wasn’t alone. Something exhaled on me. It’s not often my arms start feeling like a block of ice, but I warmed them up and proceeded out of the auditorium. Whatever it was had left. By now it was night so I turned my flashlight up to its maximum setting. I tried some of the other auditoriums, a lot of them were completely gone, naught save sticks and rubble. I was about to leave when one of them caught my eye.

Room C, if memory serves, though the room labels were coated in soot and nigh impossible to make out in the limited visibility.

The door was broken off its hinge and tilted askew, it gave way to a massive cinematic cave at least 70 feet high, the seats in the back so far from the screen up front that I wondered how anyone sitting back there was supposed to watch the movie. It seemed impossible. This screen was in much better condition, save one corner which had been singed by the left wall it was intact. A vacant slate, a blank gray monolith that careened upward in my field of vision.

Fingers on my arm. Again, the sensation was unmistakable, so my heart skips a beat, I turn around, and there’s nobody there. But there is something.

Spots made of little flashing debris. Debris the size of rice. They flicker, alternate between a stark white and a deep jet black, and they also seem to glow in the dark. I reach down and touch the substance.

It’s a liquid, a liquid composed of these little electric black-and-white things. They move and crackle like a hive of insects, they feel moist but also give your fingers a little shock, like those novelty chewing gum things. I’m not sure I would describe it as painful. Whatever this residue is, it looks like static. Like TV static. Like someone sliced open a television set and disemboweled it, spilling its innards all over the floor. I don’t know how else to describe it.

It leads up in a trail to the projection room, so against my better judgment I shamble up the stairs in the back, holding the wall and sticking close to it. Five feet to the projection room. Never been in one of these before. I always wondered how they looked, how it would feel to watch a movie from up here as the projector is spinning and performing its illuminated magic for the assembled crowd of hundreds below. I open the door, which has been halfway consumed by those long-gone flames, and step inside.

There, sitting on the projector, is a VHS tape. And around me- all around me- is this crackling substance, this wet chaos. It floats in the air, some of it, another bit sticks to my shoes. I approach the projector, which has been eaten away by rust during this long, long six-year interval. This is the VHS tape: 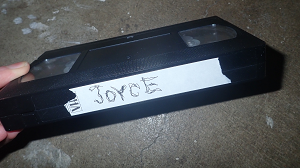 I decide to take it. If I don’t, nobody else will. So now I’m running out of this room full of this substance- at the time I was scared it might have been radioactive, cassette tucked under my arm, and I step over all the rubble and assorted debris and run for the exit like Hell. As I do, my flashlight dies and I’m surrounded by the claustrophobic energy of the place, how it swallows you deep inside. And if someone got lost in here- like, really and truly lost- they would probably wander around before collapsing and starving. Luckily with a shake of the light I’m able to resuscitate the batteries. I scramble out the front, picking my way across the heap of discarded refuse, and then I’m back on the street. I turned the tape over a few times in my hands. Bent down to see if any of the stuff was on me. There was a little bit, but it was fading. Becoming less vibrant, it flicked on and off a few times, and then as I tried scooping it up I realized it was nothing more than dust. It blew away in the wind.

Just dust. That’s what it was. I know, right? I’m an idiot. I guess that while I was shining the flashlight on it there was some kind of optical illusion. Something to do with the way the light reflected off it or something. I don’t know, really, I’m not that good at optics.

I drove to a Denny’s a few miles down the highway because it was the only place open this late and got a coffee to keep me awake for the drive back. My nerves needed some refreshment, I was exhausted. I had the tape out in front of me, and while I was turning it over in my hands I noticed that this guy in the booth opposite me was looking at the tape while he stuffed his face with pancakes.

He was tall, and thin, and I guess he had an Alfalfa haircut- that is to say, there was this one sprig of hair that stood up on the front. And he was wearing this professional business suit. He looked kind of goofy, if I’m being honest. He got up and walked over to me.

“How much for the tape?” he asks. I was confused by this, but I figure maybe he’s some kind of collector. But then, he doesn’t know where this tape came from, or what’s on it. Hell, I don’t even know what’s on it. And I should have got up and walked out without giving him the time of day. Because I wanted to know what was on it. I still do. That same insatiable curiosity, that same hunger, the imp of the perverse, as Poe put it. I was tired though, my senses were impaired from the experience at the Harcourt.

“A hundred dollars,” I murmur absentmindedly, really to see if he’ll bite more than anything else. I doubted he would go for it, but he smiles and reaches for his pocket. I gape, wide-eyed, as he lays out a crisp $100 next to my cup.

And after that I drove straight home. Typing this up now, it all seems imaginary. Too coincidental to be true. I suppose that’s the problem with my line of work- we must remain simultaneously skeptical and open minded, disregard confirmation bias while at the same time giving into it. We must accept the improbable while discarding the patently impossible, and we must firmly ride the line between hearsay and fact.

I still want to know what was on there.

Probably just a bootleg of Bill and Ted’s Excellent Adventure or something.