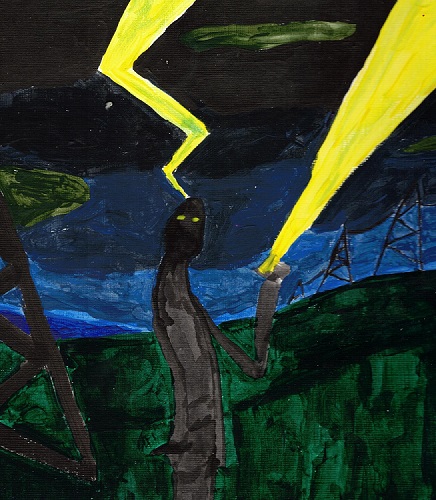 The year is 1895 and the Space Between has been ruptured.

The Brothers Lumiere do not know it, of course, that their Cinématographe is a method of communication for things unknown, as well as a cheap and effective means of entertainment. But the Space knows. The Space, which has sat for the most part dormant through countless millennia, stirs ever so slightly as the projector begins and the film begins its descent from one reel to the next and the lights in the room dim. The Space understands, via the eternal mind, and the will of the Dreamer, that this is something more. Something far more than the printed word, impersonal and distant, far more than the simple still images which were without form and without substance. These are things which defy the limitations of the human consciousness- and wherever limitations are approached and subsequently exceeded, the Space grows in size and in perceptibility.

Small things, a quarter of an inch in diameter, rise from the collective of eternal gray liquid and entangle with each other. Tendrils grasp and search, frantic, desperate for more. Outside the theatre, one pedestrian is informed of the marvelous new invention. By daybreak, Paris knows. Within the week, telegrams have been dispatched. The world begins to consider the new idea- and as it does the appendages undergo a metamorphosis, both in size and shape. It was only a matter of time.

The young things are suckled in the sea of white noise as libraries are established and societies dedicated to the preservation of the art gather in dark secluded viewing palaces which echo the womb. The young things want to return to ignorance, to the blissful warm depths of the gray liquid. However, this is an inevitable process, and deep down somewhere they know it. They know that time moves forward, and the people outside the Space- the real people- will do anything in order to perpetuate the life of the young things.

New sensations are introduced to the embryonic concepts. From far away the rattling echo of a grand piano in an abandoned theater, which gives way to a slow operatic ragtime piece composed by Scott Joplin for his new opera, Treemonisha, which will alter the manner in which Americans view popular entertainment and figures of authority. Then the ears of the beings are folded in impossible geometric configurations and bombarded with jazz quartets and the garbage cans of Tin Pan Alley- and as they listen to these things, these things marching in constant progression like a marching band at a grand civic parade- their eyes record Melies' fantastic rocket and Christensen's dark Wiccan cauldrons. And they begin to understand.

This comprehension is exponentially strengthened as the first words begin to seep into the gray liquid. Language, music and sight- in a holy trinity which causes the young things to break from their puparia and move in the substance. They can vaguely make out the surface above of the depthless sea, the unfathomable infinite ocean. And their arms begin to emerge.

As the information outside flows inward, the Things begin to know pain. They begin to understand how it feels to interact with a samba, to undergo an intermission, to weather through Act II. These sensations are not all entirely pleasant. And as consciousness sinks in- full and total clarity- the things begin to understand their purpose as they drift slowly upward across the void, ten feet per decade. They are to serve as the mirror image, the antithesis, the balancing of the scales, as it were. They are to monitor, to record, and all that is delight for the people outside is to be pain in here. Agony and suffering.

The inevitable, irreversible process continues, as projectors are made lightweight and film cameras are made affordable to every consumer. A 21-year old named Philo Farnsworth creates an entirely new process by which form might be manifested, this one operating off an electric circuit. The gray liquid boils, and the infernal box is made solid as a furnace which scalds the still-developing flesh of the Things. In this adolescence of obligatory service, the Things grow bitter and the first signs of rot emerge. The teeth, which grow pointed and jagged. The optical sensors fade from a calm and serene white to a hideous ruby, reflected from faraway Antares. And the arms- all eight of them- protrude and the dry residue flits away and reveals spiny, cartilaginous sticks. They are enveloped and coated now in nonstop sensory input from all directions. And the Things all scream in unison.

For the solid flesh manifest in the world beyond, innovation in the field is actively encouraged. Breakthroughs are made, camera tricks and lighting effects and narrative structure are refined and edited like a sharpened blade, a straightedged razor, again and again, and year after year this razor cuts into the indeterminate flesh of the Things, and they bleed background radiation and vomit pure static. They know little. But they are angry, and they are quickly learning the cause of their plight.

The year is 1963 and sound waves are funneled through the speakers of Dictaphones, etched onto ferric oxide and reeled safely into a plastic housing. The Compact Cassette offers a portability to sound which had previously been impossible, an instant gratification, an insanely small and cheap device with unparalleled sound quality and practical application. Every vocal memo, album and speech is blasted at the Things, who are now mere centimeters from the surface. The noise of everything all at once can barely be made out over the endless scream, the eternal wail.

For some time, their motion upwards is halted. The dream people understand that this halt is merely temporary, the result of a faraway war which rages on and stifles progress. They gaze at the light as it beckons them, waiting to break through the embryonic shield, the final stage in their development. For ten long years the things wait, their limbs extending, their internal organs becoming hard and bitter as sour brandy.

The year is 1977. VCRs hit the American market. Anyone can now, with the press of a button, instantly record and view any video.

The Things spring up, buoyant and energetic, from their long slumber they arise, and they acquire their first breath of the static atmosphere. The static is sharp and jagged, it cuts through their spiny exoskeletons, a blizzard of information, of pain, of torment. And they understand just how connected they are with that pain, that it is an integral facet of their identity, that they are experiencing more pain than any corporeal being would be able to withstand. An existence of pain, such that their tolerance for the sensation is heightened and in a few seconds of mere exposure to the flashes of light and the hailstorm of noise their exteriors are strengthened a thousandfold and their eyes grow third and fourth eyelids, and as the waves of viscous memory pool around them they howl in unison for the Dreamer to arrive.

The Dreamer manifests in a small vessel with oars and oarlocks, and the storm of information does not at all affect him. He is frail and thin, as he always has been since time immemorial and will be until the heat death of the universe, yet he radiates a consciousness more tangible than any the Things have yet encountered. And with a flourish of his robe, he beams the meaning of life on a rainbow of clarity into the cranial cavities of these disfigured and unwanted abominations. And it is this:

In unison, the things repeat this mantra from their dry mouths, desperate for a release from this state. The tapes are being inserted and ejected, traded and copied, and each particulate of light transmitted across the head of this horrible new consumer-level format creates insufferable wounds, wounds which against all odds heal instantly yet cause that same stinging pain in the instant they exist, that same sensation of rupture and of chaos.

Yes, they nod in unison. Free us. Let us experience the same which they have experienced, such that we may eliminate it, such that every memory we eradicate may be one less mark on our flesh. Such that for every record lost or misplaced, the storm will diminish. We understand. The comprehension is felt among and between them as the Dreamer places his fingers to the back of his neck in the small wooden boat manifested from his own thought. As this process is achieved, the digital era begins and the information becomes faster and faster, harder and harder. Several of the Things are pulverized by erstwhile data packets. Time is of the essence. Time is the essence.

How? They scream above the winds which whip over them, yelling and staring at the empty atmosphere of background scatter above. The Dreamer points at one of the group, an extremely malformed and malnourished individual. His finger is like a dagger in that silent moment, the moment the Internet becomes a global phenomenon and is widely adopted by most households, resulting in the unlimited spread and access of everything, for everyone. The world may be at the fingertips of the people of the Space Outside, however for this one unfortunate wretch he is held captive at the fingertip of the Dreamer.

His peers moan and shamble toward him across the everlasting ebb and tide, in the thousands they gather upon him like a swarm of insects, and the last thing he sees before he is phased beyond the barrier and sacrificed, invisible, at the base of a radio tower in the desolate and void foothills of Boulder County, Colorado, to bear the brunt of much of the storm such that the others may suffer less, are the eyes of those who he has grown in unison with, the gaping maws as they send him to his purgatory, to become the most important unit in an unseen circuit which runs like a thread through all human consciousness the world over.

Their suffering is reduced, yet their work will never end. They will recollect every stolen second, or die trying.